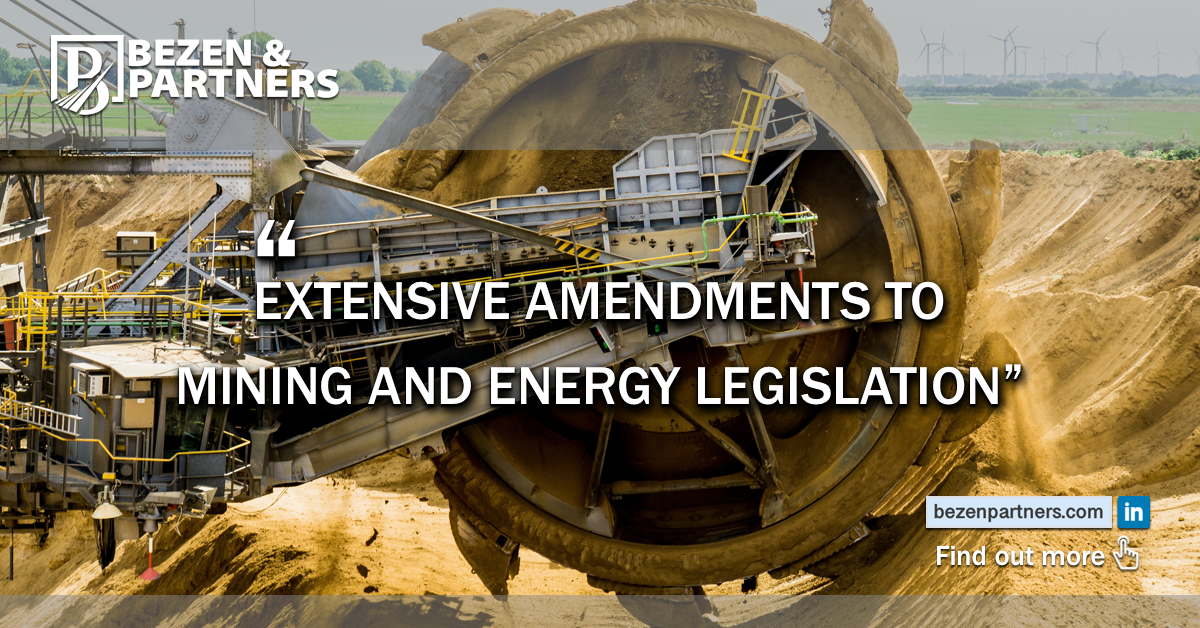 The Law Amending the Mining Law and Certain Laws and Decrees numbered 7164 (the “Amending Law”) has been published in the Official Gazette dated 28 February 2019 and numbered 30700. The Amending Law introduces several key amendments relating to the mining sector as well as the operation of the downstream energy market.

Some of the fundamental changes introduced by the Amending Law with respect to the Mining Law No. 3213 are discussed below.

Previously, the Mining Law allowed the General Directorate of Mineral Research and Exploration (Maden Tetkik ve Arama Genel Müdürlüğü) (“MTA”) to carry out mining research and exploration activities in Turkey but did not give allowance for MTA to engage in operational activities. The Amending Law adds “operational” activities to the scope of work of MTA so that MTA will be able to directly “operate” any mining resources that it has discovered. According to the Amending Law, MTA will be able to incorporate subsidiary corporations subject to private law for its operational activities.

The Amending Law allows EÜAŞ to purchase coal from companies authorised to build and operate electricity generation facilities under the Law No 3096[1] (namely coal based thermal power plants implemented on the basis of BOT model). As a State economic enterprise, EÜAŞ cannot engage in any commercial transaction which is not explicitly allowed by law. This change will provide express legal basis to allow EÜAŞ to purchase coal from such companies to use in its electricity generation facilities.

The Mining Law does not permit first applicant rights[2], exploration licences, discovery (buluculuk) rights and operation licences to be divided. The Amending Law includes the right to develop a proven reserve (görünür rezerv) into such prohibition and states that these rights can only be transferred in their entirety and subject to the approval of the Ministry of Energy and Natural Resources.

The Amending Law removes the requirement for companies engaging in mining activities to include express provisions in the “scope of business” section of their articles of association detailing their mining activities. This amendment appears aimed at conforming mining legislation with the Turkish Commercial Code No. 6102 which abolished the principle of “ultra vires” – the doctrine that a corporation’s capacity is limited by its articles of association.

The Amending Law allows licensees to register their discovery rights (buluculuk hakkı) and rights to develop proven reserves with the Mining Registry so that third parties will be aware of the existing rights within a particular region. In addition to this, the Amending Law allows the registration of operational permits to land registries in order to ensure publicity of existing licences and allow third parties to determine whether there is mining rights on any area that is being considered for any other investment or activity.

Overlaps between various licences and usage restrictions imposed on certain land types (i.e. forests, national parks and similar land subject to special environmental protection regimes) are amongst the primary reasons that delay infrastructure projects.  Previously, the Mining Law placed this regulatory risk on licensees and provided that failure to obtain land permits within one year from application will result in the cancellation of the entire licence. If the applicant did not want to take on this risk, it would have to limit its application only to such part of the land that does not have overlapping areas. According to the new mechanism introduced by the Amending Law, in case a mining licence application overlaps with other licences or is subject to regulatory usage restrictions, the applicant will again have a period of one year from its application to obtain the necessary permits and licences but if such permits and licences cannot be obtained within this time, the affected section will be removed from the licence and the amended licence will continue to be in force and effect for the remaining area, without the risk of automatic cancellation.

In order to minimise unutilised and idle mining capacity, the Amending Law introduces a prohibition on any commercial and industrial activity in licensed sites other than mining.

The Mining Law provides certain incentives to investors who increase the added-value of mines by processing extracted raw materials and producing intermediate and final goods in Turkey.  These investors benefit from a 50% discount to State contribution fees (Devlet hakkı) which is a fee paid to the State for all extracted mine.  The Amending Law increases the quantum of the applicable State contribution fee for gold, silver and platinum and decreases the applicable discount rate to 25% for such mines.

However, for mines listed under paragraph (c) of Group IV other than gold, silver and platinum, in case such mines are processed into metals in Turkey, an increased discount rate of 75% to State contribution fees will be applied according to the Amending Law.

The Amending Law increases the amount of licence fees and sets forth additional procedures and principles for their collection.

The Amending Law allows the consolidation of different licences under a single licence provided that all applicable licence fees have been paid and all merged licences have valid operational permits.

The Amending Law proposes flexibility to allow mining sites to be allocated to specialised State entities without a tender subject to the Minister’s approval, provided that such entities undertake to produce intermediate and final products and construct requisite facilities on mining sites.

The Amending Law introduces changes to the timeline for licence extensions and requires licensees to apply for an extension six months prior to the expiry date of their existing licences at the latest.

Registration of regulatory agreements with the Mining Registry

In order to protect the rights of successor licensees in case of licence transfers, the Amending Law requires the standard form research and exploration agreements executed between the General Directorate of Mineral Research and Exploration and licensees to be registered with the Mining Registry.

The Amending Law introduces a noteworthy change in respect of royalty sites (rödövans sahaları). According to the Amending Law, if there is an existing royalty agreement for any section of mine sites operated by the Turkish Hard Coal Directorate and the Turkish Coal Enterprises, then such entities will be able to de-merge such land subject to royalty agreements and transfer the usage rights and operation licences to the royalty owners (rödövansçı).  This will allow royalty owners to operate mine sites directly without any royalty arrangement by assuming all rights and obligations of the mine operator. The Amending Law sets forth that royalty agreements can only be executed with the approval of MAPEG, but that MAPEG cannot be named as a party in such agreements.

The Amending Law grants the Energy Market Regulatory Authority (“EMRA”) the ability to impose additional requirements for petroleum distribution licensees which operate under the Petroleum Market Law numbered 5015[4]. According to the Amending Law, EMRA will be able to impose threshold restrictions on distribution licensees as to the number of dealers and the amount of storage capacity. In addition, the Amending Law entitles EMRA to request a letter of guarantee from petroleum market participants, at its discretion.

The term “hybrid generation facilities” as defined in the Law on Utilisation of Renewable Energy Sources to Generate Electricity numbered 5346[5] does not readily cover all types of power plants that generate electricity through two or more energy different resources. The Amending Law gives EMRA authority to issue secondary legislation which regulates the sale of electricity generated in power plants based on multiple renewable energy resources within the scope of the Renewable Energy Support Mechanism (YEKDEM).

The Amending Law also authorises EMRA to issue secondary legislation to regulate the licensing procedure and activities of power plants based on multiple energy resources (including renewable and non-renewable resources).

One of the key highlights of the Amending Law with respect to the renewable market is the new mechanism that allows power plants based on renewable energy to increase their installed power capacities. The Amending Law introduces a mechanism that will allow an increase to the installed capacity of power plants based on renewable energy resources provided that (i) such increase will be implemented within the project site as determined under the relevant generation licence; and (ii) the positive opinion of TEİAŞ and/or the relevant distribution company has been obtained. This change appears aimed towards facilitating increases to the installed power capacity of renewable power plants at lower investment costs.

According to the Electricity Market Law No 6446[6], a usage fee needs to be paid in case an electricity transmission/distribution facility overlaps with a forest land. The Amending Law decreases this fee by 50% in order to promote the construction of transmission and distribution infrastructure. Furthermore, the Amending Law abolishes the obligation to pay such fees retroactively for past years during which the facility may have been operated without land permits.

According to the Electricity Market Law No 6446, electricity generation facilities owned by EÜAŞ or its affiliates and generation facilities that were privatised must obtain the necessary environmental permits and licences in order to comply with the applicable environmental legislation by 31 December 2019. The Amending Law extends this period to 31 December 2021 provided that such facility has executed an agreement with a contractor to commence construction works.

The Amending Law also adds several provisions to the Statutory Decree No. 702 in connection with the statutory duties and authorities of the Nuclear Regulatory Authority and penalties relating to radioactive waste management. The Nuclear Regulatory Authority is a public entity established by Statutory Decree No. 702 as the public authority in nuclear safety, security and licensing, assuming all such duties from its predecessor, the Atomic Energy Authority.

Although a larger portion of the Amending Law has been devoted to mining legislation, there are many key developments concerning other energy resources and markets. These amendments overall appear aimed at tackling difficulties faced by energy market participants and facilitating and promoting more efficient resource utilisation. Considering the fact that the Turkish Government is continuously updating mining legislation in order to boost the use of “indigenous energy” and increase the operational efficiency of existing mining sites, it is not unreasonable to expect another round of amendments to mining legislation in the near future, this time focusing on tendering procedures for the mining sites in line with past statements from Government officials.

[1] Law on Assignment of Enterprises other than Turkish Electricity Administration to Produce, Transmit, Distribute and Trade Electricity, published in the Official Gazette dated 19 December 1984 and numbered 18610.

[2] This is a preference right granted to the first applicant for any mining rights.