A Note on the New Mediation Regulation 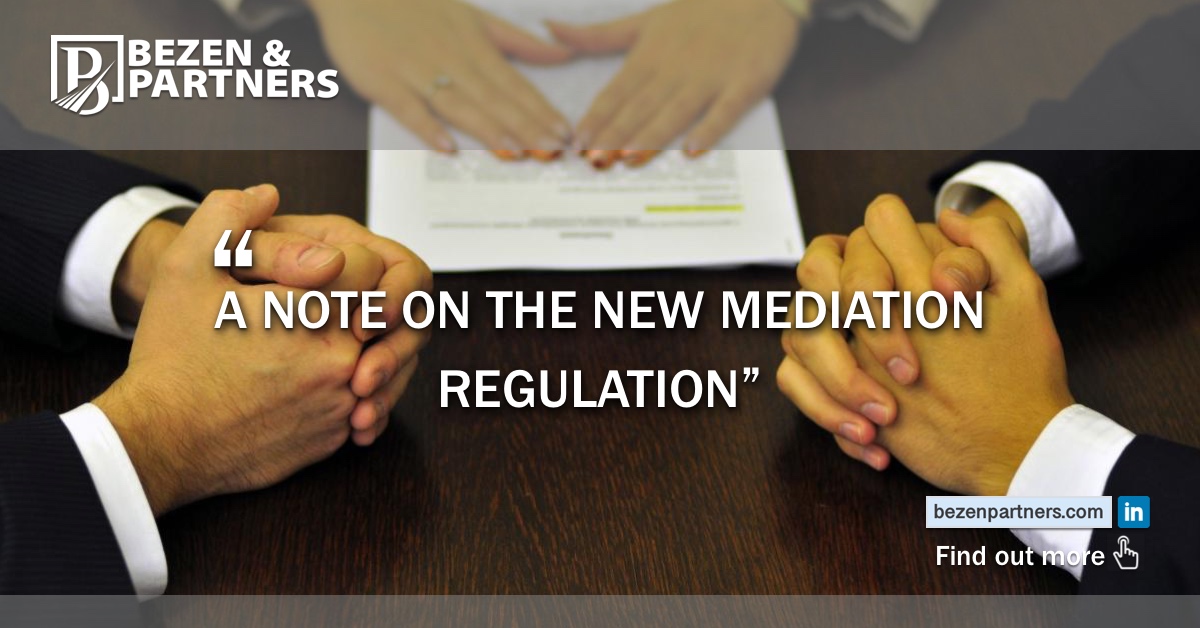 The Regulation pertaining to the Law on Mediation concerning Civil Disputes (the “Regulation”) has entered into force following its publication in the Office Gazette numbered 30439 on 2 June 2018. The objective of the Regulation is to regulate all types of mediation proceedings in the Republic of Turkey. As such, the scope of the regulation comprises the following subjects: (i) all types of mediation practices regarding the resolution of civil disputes through mediation; (ii) the representation of the administration in civil disputes involving the administration as a party; (iii) the procedures and principles regarding mandatory mediation where the mediation procedure is prescribed by law as a precondition for initiating a formal lawsuit; (iv) the training of mediators and the mediator examination; (v) the setting up of the registry of mediators; (vi) the supervision of mediators and related training organisations; and (vii) the working principles of the Directorate General for Mediation and the Mediation Board.

In line with internationally applicable rules and understandings, the Regulation defines the term “mediation” as a voluntary alternative dispute resolution mechanism that is carried out as a public service and involves a professionally trained neutral and independent third party who (i) brings the parties together in order to allow them to negotiate towards a resolution; (ii) attempts to enable the parties to understand each other and to resolve their dispute themselves; and (iii) is able to suggest a solution where the parties are unable to proceed if authorised by the parties to do so.

Articles 5 to 7 of the Regulation set out the general principles of mediation. Accordingly, as mediation constitutes a voluntary alternative dispute resolution mechanism – except for situations in which mediation procedures are prescribed by law – the parties are free to determine whether or not they wish to refer their dispute to mediation. They may equally determine to terminate the procedure at any point during the mediation process.

Another general aspect of mediation is confidentiality and its “without prejudice” nature, which serve to ensure the effectiveness of mediation by providing a guarantee to the parties against the risk that their statements and expressions are used against them in future litigation or arbitration cases. Unless otherwise agreed by the parties to a mediation procedure, mediators are obliged to keep confidential any information or document submitted or otherwise obtained. Such confidentiality obligation extends to the parties, their representatives, attorneys and any other person taking part in the mediation procedure. Furthermore, the statements and documents submitted in mediation – regardless of their form – may not be submitted as evidence if the dispute at hand is later referred to litigation or arbitration: (i) invitations to mediation submitted by the parties or a party’s request to join a mediation; (ii) opinions and requests pertaining to the termination of the mediation procedure; (iii) any admission of a given event, fact or claim or any suggestion submitted during mediation; and (iv) documents that have been drawn up exclusively for the purposes of a given mediation procedure. As such, these statements and documents may neither be submitted as evidence nor requested by courts, arbitral tribunals or administrative authorities. Even if such documents have been furnished during the course of any litigation or arbitration, they may not be taken into account when rendering a final judgment.

The Rights and Obligation of Mediators

The rights and obligation of mediators are set out in Articles 8 to 14 of the Regulation.

The Regulation provides that the title of mediator and the powers conferred upon such title may only be used by mediators that are registered with the registry of mediators maintained by the Ministry of Justice.

Mediators are allowed to request a fee for their services as well as the payment of an advance payment in respect of any expense to be incurred in connection with the mediation procedure. Unless otherwise agreed between the parties, the fees of mediators shall be paid in accordance with the tariff rate effective on the date the mediation procedure is concluded and the fees and expenses of mediators shall be paid by the parties in equal shares.

Mediators are entitled to communicate with the parties separately as well as jointly, making use of any communication method. They are obliged to carry out their services and duties diligently and in person, meaning that they are prohibited from assigning any of their duties to another party in full or in part. Mediators are further obliged to remain neutral and may not act as an attorney of one of the parties to the dispute during litigation or arbitration procedures initiated following mediation.

The parties to a dispute are free to decide to refer their dispute to mediation prior to or during the course of a lawsuit. National courts are also entitled to inform the parties about the process and legal effects of mediation as well as its advantages. If the parties decide to submit their dispute to mediation in the course of an ongoing lawsuit, the proceedings shall be postponed for a period not exceeding three months. Such period of three months may, however, be extended once for another period of three months, provided that the parties jointly apply for such extension. The time between the commencement and conclusion of mediation proceedings is not taken into consideration when calculating the periods in relation to the statute of limitations and the lapse of time rules.

Unless otherwise agreed by the parties, a party’s invitation to mediate shall be deemed rejected if the counterparty does not accept such invitation within 30 days. The general rule is that mediators are appointed by the parties, however, the parties may determine that another procedure shall apply. The parties are further entitled to decide the details of the procedural rules applicable to the mediation procedure, provided that such rules are not contrary to mandatory provisions of law.

Mediators are prohibited from taking any action constituting the application of judicial authority that may only be used by national judges. Mediators are not allowed to provide legal advice to the parties and may only suggest solutions if the parties reach a deadlock and are unable to produce a resolution.

The parties are free to attend the mediation proceedings in person or via their legal representatives or attorneys. The participation of experts in mediation proceedings is possible in circumstances where experts would contribute to the resolution of the dispute and the parties expressly consent to such participation of experts.

The issuance of annotations of enforceability constitutes a non-contentious procedural matter and related examinations are therefore completed without any hearing. The only exception hereto are family law matters which are considered eligible for mediation; in such cases, the issuance of an annotation is subject to a hearing. In circumstances where an application to mediation has been made prior to the initiation of a lawsuit, the issuance of an annotation of enforcement may be requested from the civil court of peace (sulh hukuk mahkemesi in Turkish). However, if the application to mediations has been made during the course of a lawsuit, the issuance of such annotation may be requested from the authorised court hearing the case at hand.

Mandatory mediation procedures constitute a precondition for the commencement of formal litigation. The principal types of cases the resolution of which depend on the conclusion of mediations are those listed in Article 3 of the Law on Labour Courts numbered 7036 and published in the Official Gazette dated 25 October 2017 and numbered 30221. In cases where mediation is prescribed as a precondition, the claimant is obliged to attach to its lawsuit petition the original or a copy of the final mediation protocol demonstrating that the respective parties were unable to reach an agreement. Failing to do so will – as per Article 22 of the Regulation on mandatory mediations – lead to the direct rejection of the lawsuit petition on procedural grounds without any further procedural action or hearing.

Article 25 of the Regulation deals with the particulars of mandatory mediation procedures. Mediators in mandatory mediation procedures are obliged to conclude the procedure within three weeks as of the date of appointment. If necessary, such period of three weeks may be extended by the mediator for a period of one week. The Regulation further stipulates that time periods pertaining to the statute of limitations and the lapse of time rules shall not progress during the period between the application to mediation offices and the issuance of the final mediation protocol between the parties.

Mediation constitutes a type of alternative dispute resolution mechanism and involves the efforts of a neutral mediator who refrains from biased and guiding action or making a judgment. The main function of a mediator is to facilitate effective negotiations between the parties in order to assist them to reach a resolution that is mutually acceptable to the parties.

Mediation is relatively new to the Turkish legal culture, which is why the number of applications to mediation in Turkey remained lower than the figures in other, mainly Western jurisdictions. It is expected that the newly introduced mandatory mediation requirements will increase the popularity of the practice of mediation within Turkey. The accumulated experience with respect to mandatory mediation may, over time, also lead to the consensual choice of parties to attempt to resolve their dispute by way of mediation.

Although lacking the binding force of formal court judgments, the agreement of the parties reached as a result of mediations may still be granted the power of a court judgment by way of an annotation. The advantage of mediation is mainly that the procedure is confidential and that it offers the parties the possibility to settle their dispute in a more cost and time efficient manner.